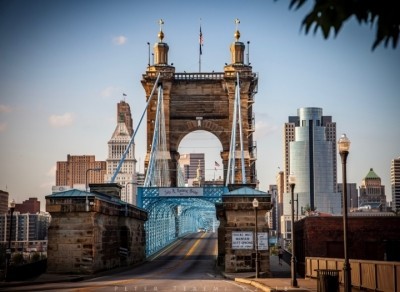 The John A. Roebling Suspension Bridge stands regally at sunset, Bridging Two Cities, Covington and Cincinnati. I grew up in Covington. As a child I recall walking this bridge with my grandparents to visit the model train exhibits in the lobby of the Cincinnati Gas & Electric Company. During the holidays, we rode the bus across to the Dixie Terminal, where diesel fumes mingled with the aroma of freshly baked pastries. The city was alive with shoppers, and department stores put on lavish displays of animatronic nutcrackers, and winter scenes to set the mood. Free cookies and hot cocoa were in abundance, and lights twinkled along the avenue. It was a time when coming into the city brought a sense of excitement and wonder.

After decades of fleeing to the sub-burbs, and malls, the last ten years have witnessed a renaissance of the Queen City of the West. The banks development is drawing people back to the city for sports and entertainment. Residential developments are expanding, and the revitalization of Over the Rhine, is bringing in food critics from around the world. A newly renovated Music Hall and other theatrical experiences have combined to put our fair city on the New York Times list of 52 Places To Go in the world in 2018. Cincinnati came in at number 8. The only other US city to crack the top 10 was New Orleans, which was the number one pick.

After raising two wonderful children in Northern Kentucky, Joy and I decided to move to the city. We left a house in the burbs, for an apartment along the river, just over two years ago, have been traveling more, and enjoying time with friends and family. It is an exciting time to live in the heart of the city, perhaps even a golden age, though only time will tell. So long, from The Murphy-Cam Project!