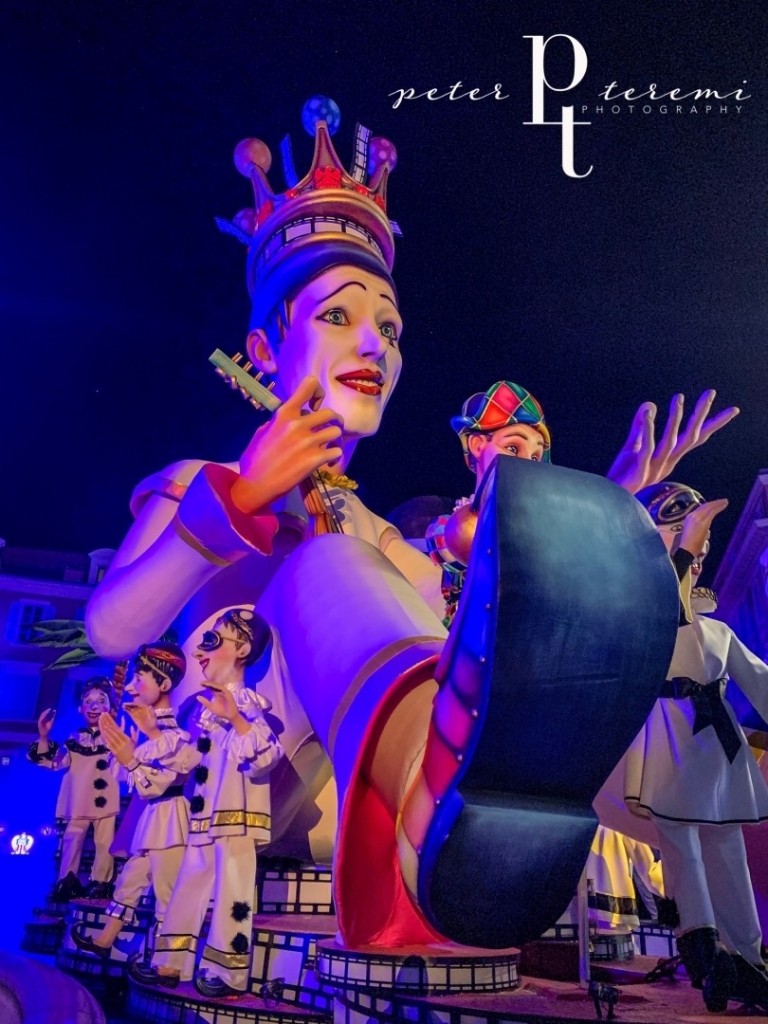 Carnaval De Nice traces it’s earliest origins back to the Middle Ages. It was a street party without organized parades until the 19th century. Today, it is a party of some magnificence, based on a theme for the year. A king is created to preside over the festivities throughout the multi day event, and then set on fire at the conclusion while fireworks alight the night sky over the Mediterranean.

This years theme is King of Cinema. We attended the opening event called the Flower Parade. As we approached the venue, music could be heard throughout the city.  To my surprise and delight memories from my youth and adult experiences bubbled up as movie themes filled the French Riviera. Scores from films like Ghost Busters, Dirty Dancing, Footloose, Top Gun, Star Wars, and so many more welcomed us in to the celebration.

Security was heavy, and the cues to check in through the metal detectors were smooth and efficient. We felt safe throughout the event. I will note, it was surreal to see hevely armed police in military SWAT style Kevlar vests, holding assault rifles all the while smiling, greeting us, and singing a genuine “Bonjour!” as we entered. I have no doubt that these fellas would not hesitate to squash any foolishness should it arise.

The parade itself was spectacular! The music, dancers, movie themed floats, and the flowers. It was all about the flowers. Almost every float, in addition to being movie themed, was made of flowers. I did not hear any statistics about how many were used for the parade but we did notice that the streets, normally lined with floral shops were all empty and still cleaning up the remnants well after the event.

During the parade, sprigs of every floral speciesis were lauded into the stands. When it concluded the flower floats continued to circulate the venue passing out wave after wave of arrangements as they were disassembled.

There is an evening event called Parade of Lights which we did not attend. I’m sure it was just as cool. Joy and I did wonder through the Carnaval venue after dark. There was a Ferris Wheel, similer to the SkyWheel in Cincinnati, and a carrousel, but did not ride.  We found a food stand that made cotton candy while you wait. An image of that glorious treat is among those below, along with a Charlie Chaplain float, and many other tidbits from the experience.

Signing off from Nice. We appreciate all the thoughts and well wishes from so many of you throughout our adventure. We also made some new friends on social media from France, Welcome! So long from the French Riviera. Au revoir!